The article is effective to understand scatter plots where the researchers can represent the data through graphical interpretation. The recent trend as well as the interrelationship between the variables can be analysed through the scatter plots.

What is Scatter Plot?

A scatter plot is mainly a type of plot or mathematical diagram using Cartesian coordinates to display values for typically two variables for a set of data. If the points are coded, one additional variable can also be displayed. Scatter plots' is primarily utilised to observe and show the relationships between two numeric variables. The dots in a scatter plot not only report the values of individual data points but also patterns when the data are taken as a whole. Hence, the relationship between the two variables can be analysed and it is considered as a descriptive-analytical tool where the researchers can compare and variable data counts through the graphs. Moreover, the interrelationship between the dependent and independent variables are also analysed well through a scatter diagram, where the X-axes represent dependent or Y axes refers to the independent variable. Putting the gathered data on the scatter plots will show the trend of the data and it will provide scope to the researchers to analyse the impacts of the independent variable on the dependent one in the data set. Hence, it is widely utilised by the researchers to conduct diverse researches including marketing and sales, finance, pharmacy and health care, market research and biology, to represent the gathered data and provide in-depth critical interpretation. 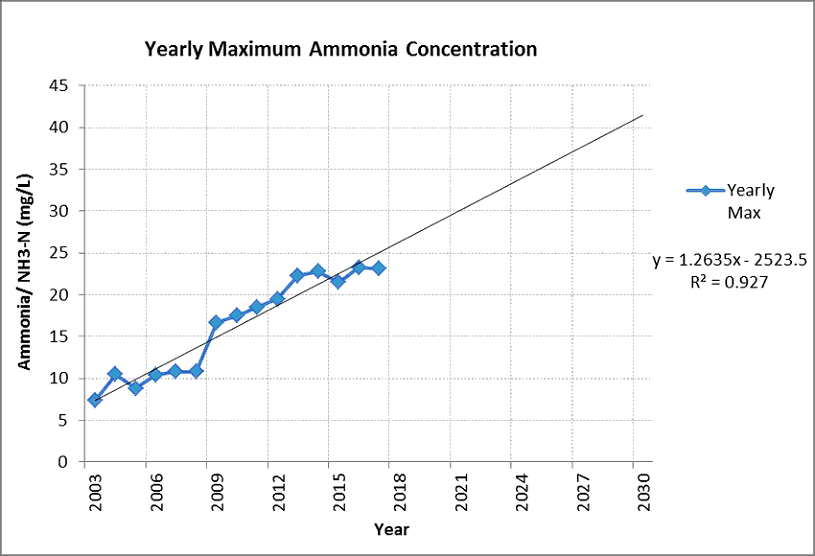 The straight line is an upward sloping line, which represents that over three years, the ammonia concentration is increased.

Hence, a scatter diagram is a graphical representation of the gathered data and information, where the two variables are represented in the X and Y axes. The researchers try to identify the interrelationship between the two variables, to analyse the data efficiently for final programme evaluation. Scatter plots are utilised for descriptive statistics and it is also utilised in r for representing the data and evaluating the interrelationship to analyse whether there is a positive or negative correlation between them. It is important to have an understanding of SPSS properly. Our expertise provides you with SPSS help and is tailored to help you understand scatter plots and how to represent your research on them. You can contact our SPSS experts by filling the request form and we are available to assist you–regardless of your specific research design.

I had to submit a big report within a few days. I thought it was impossible to do so. But experts from SPSS Tutor Saved the day.

had complex research about a medical condition. It was difficult to finish the tasks. But thanks to the SPSS tutor, they helped me to finish tasks on time and made it look easy.

I had to write an assignment for an IT topic. It required research on new technology. Finding information about it was difficult because it is new. But the SPSS tutor team helped me with it and today I got the highest grades in the class.

They helped me with my statistics homework. The team is friendly, the service is nice and I liked how they kept asking me suggestions. I loved their service and would recommend it to others.